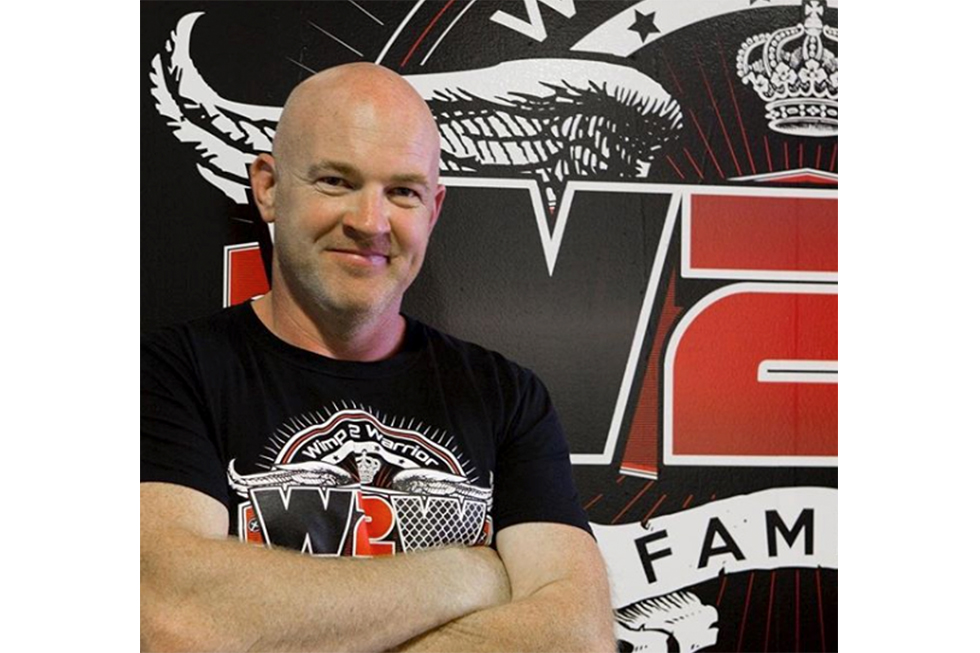 Richie Cranny doesn’t seem like your every day thug. He does have a shaved head, but he’s not covered in piercings or tattoos and he’s far from scary (except maybe to his 3 kids 😜).

So it was absolutely mind blowing to hear that when he first opened a gym in Sydney, he had to door knock the local community to convince them his gym wouldn’t send the price of housing into a downward spiral!

Yep, the Wimp 2 Warrior (W2W) story is an interesting one … and we had a chat with owner Richie last week to get the full lowdown …

Q: WHAT IS WIMP 2 WARRIOR (W2W) AND HOW DID IT COME ABOUT?
I owned a gym in the UK and we offered a Mixed Martial Arts (MMA) program that was really successful. When I moved to Australia, I discovered there was a real stigma attached to MMA – everyone thought it was some sort of human cock fighting. So, I bought a gym in Potts Point and decided to make it my mission to share the fun side of MMA with Aussies. You can imagine my surprise when I turned up on the opening day to a carpark full of placard-wielding residents … they thought my gym would reduce their house prices by bringing a heap of thugs to the area. I literally door knocked every local house for months to try and explain that MMA was actually great for mental health and physical fitness, but I was still struggling to get people through the door.

So, after several months of slogging it out, I put an ad up on Facebook. I offered to train 1 person for 6 months absolutely free. My plan was that they would do an amateur fight at the end of the training and I would document the whole journey to show that MMA was all about health and fitness. I was overwhelmed when over 400 people responded to my ad and so I decided to train 25 people, both men and women, for 6 months instead. We had mums and dads, doctors, architects, nurses … not your typical thug stereotype! It became a YouTube hit and from there, it spiralled. The second series was broadcast on Fox Sports Australia, and now Wimp 2 Warrior is in 8 countries and there are 50 gyms running the program. This year over 4000 people will complete our program.

Q: YOU MAKE ALL OF THAT SOUND EASY – WAS IT?
Ha! Not at all … it’s been 7 years of really hard work. Like any startup, we’ve had our ups and downs, but I completely believe in what I do. I know that I can change people’s lives through MMA and that is what has kept me going in the tough times.

Q: WHAT DO YOU LOVE MOST ABOUT YOUR PROGRAM?
By the end of the 20 week program, we see people lose weight and tone up, but without a doubt, it’s the change in their mental state that I’m most proud of. Most of our clients are around 30 (men) to 31 (women) and the majority lead full-on corporate careers. They usually come to us when they need a reset, or they’re overweight, or suffering from depression or anxiety. For a lot of them, it’s a complete startover and the change is absolutely insane. By the end of the program, these same people are almost unrecognisable. They’re happy, they’re stronger (both physically and mentally) and they have a new lease on life.

Q: W2W IS GOING THROUGH SOME EXCITING GROWTH – WHAT’S DRIVING THAT?
Our growth has mostly come from scaling quickly into other countries. In addition to constantly signing up new gyms to run our program, we’re also working hard at getting MMA as a sport into the Olympic Games. We’re about to release a whole new program too, which doesn’t require as much commitment as our original W2W program. The new program runs over a shorter period of time and participants don’t have to compete in an amateur fight at the end. It will be a great stepping stone to the full W2W program. [Richie is currently in Rome presenting the new program to the IMMAF to get it endorsed!

Q: HOW DO YOU MAINTAIN WORK-LIFE BALANCE WITH THIS LEVEL OF GROWTH?
This is my biggest challenge and something I struggle with on a daily basis. As a parent, a husband and a business owner, there is always something to do. We work across so many timezones, so someone is always at work and I have to remind myself every day that I can’t always be online too. I think true success will be when I find that balance. My goal is to be able to turn my phone off and be 100% present with my family.

Q: WHAT’S THE BEST PIECE OF BUSINESS ADVICE YOU’VE BEEN GIVEN?

If you believe in yourself, you can achieve anything! In a way, this is the whole philosophy of our business. We ask a lot of our participants: they have to get up at 5am, 5 days a week for 22 weeks. It’s a huge ask, especially when your muscles ache, you’re tired and you just want to roll over and go back to sleep. But if you can get through our program, you can do anything. It’s incredibly empowering to realise you can achieve anything if you really put your mind to it.

Q: YOU’RE A PODCAST LOVER, GOT ANY SUGGESTIONS?
There are 2 that I listen to all the time … the first is The Joe Rogan Experience. He is actually a martial artist, but he interviews a really wide demographic of people about the world in general. It has become one of the world’s most popular podcasts. The other is Startup, which was particularly helpful in the early days. It’s about a guy who starts a digital media company and follows his journey (including the tough reality of business, such as the arguments with his wife and employing/sacking people).

Q: WHAT DID YOU DECIDE TO BRING YOUR TEAM TO BEACHES COWORKING, INSTEAD OF RENTING YOUR OWN OFFICE?
We’re scaling really quickly, so we needed the flexibility to expand as needed. If we’d signed up to our own office, we’d have outgrown it by now. Being able to use the meeting rooms and breakout areas without paying extra for them was a big incentive too. And finally, working within a coworking space means that on the days when only 1 person is in the office, they don’t feel so isolated as they are surrounded by other people. It’s so much safer from a security point of view as well.

Richie owns Wimp 2 Warrior and the nearest Warrior Training Facility is at Freshwater (with the next intake on 15 July 2019). The new program will be released in October 2019. Check out some of the truly inspiring, and completely life-changing, stories from W2W participants on Facebook & Instagram too.

And if you’d love to work alongside Richie and his team, why not book in for a FREE trial and test Beaches Coworking out for yourself.